Feet are the foundation of our bodies and play an important part of a happy, healthy lifestyle. The foot is a complex structure that consists of 26 bones, 33 joints, and over 100 muscles, tendons, and ligaments. Its unique design allows the foot to handle hundreds of tons of force every day. The average adult takes 4,000 to 6,000 steps per day. That’s enough steps to walk around the earth four times during your life. When you consider the weight and stress we place on our feet each day, it’s easy to see how approximately 80% of people will experience a foot related problem at some point during their life.

Each foot is made up of 26 bones, 33 joints and more than 100 muscles, tendons and ligaments, all of which work together to provide support, balance, and mobility. The foot can be pided into three categories:  the forefoot (metatarsals and phalanges), midfoot (cuboid, navicular and 3 cuneiforms), and hind foot (talus and calcaneus). Here's a look at the main structures of the feet.

Approximately 25% of the bones in the body are found in our feet. These bones can be grouped into three parts: 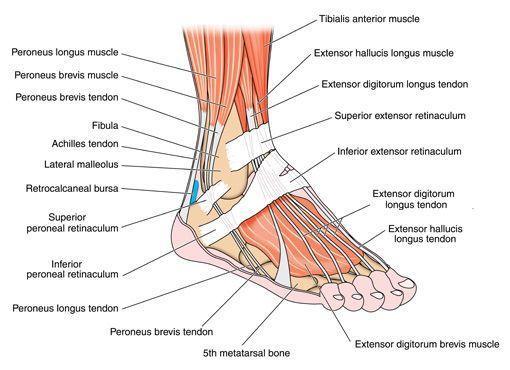 Joints in the feet are formed wherever two or more of these bones meet. A layer of cartilage covers the articulating surfaces where two bones meet to form a joint. This allows bones to glide smoothly against one another as they move. The main Joints of the foot include:

Twenty muscles give the foot its shape, support, and ability to move. The main muscles of the foot are:

Tendons attach muscles to the bones, while ligaments attach bones to other bones. Tendons and ligaments work together to provide movement, stabilize the joints, and maintain anatomical structures in our feet. The main tendons of the foot include:

The main ligaments of the foot are: